An ancient boat was found near Samara 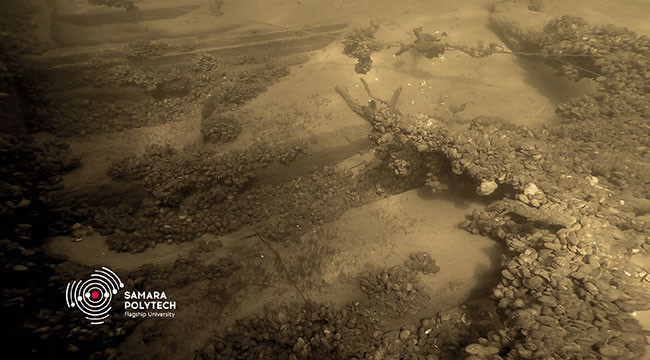 Monastery’s workers found a sunken ship at the bottom of the Volga. The task of Samara Polytech scientists is to find out what kind of vessel it is. According to preliminary data, the facility is over 600 years old.

An unusual object in the Volga river near the Holy Mother of God’s Kazan monastery in the Vinnovka village was found by the monastery’s workers. Scientists of the Samara Polytech helped identify the ancient boat by organizing several expeditions with the participation of professional divers and representatives of the scientific and production company «Ekran» (Moscow). Inspection of the discovered object lying under water at a 10-meter depth was carried out using special underwater ultrasound scanners and an underwater robot (glideron) developed at the Samara Polytech. The result struck the researchers: the size of the sunken boat is about 50 meters in length and 20 meters in width. Most of the sunken ship is in the sand, but the ultrasound images clearly show aft end and preserved frame timbers, and in the video you can see a large chain and old ropes.

During the dives, scientists took a piece of wood and a half-meter metal forged nail from the object. Radiocarbon analysis of a wooden boat particle was done in the laboratory of the Institute for Monitoring Climate and Ecological Systems of the Siberian Branch of the Russian Academy of Sciences (Tomsk). As a result of the study, the age of the object was established – 1415 year (±85 years). Even taking into account the error probability, the result of this investigation indicates that the ship was created and sunk in the Volga even before the era of Ivan the Terrible.

- If the dating obtained as a result of the radiocarbon analysis is correct, then this vessel belongs to the second half of the 14th – 15th centuries, comments Ekaterina Semenova , Doctor of Historical Sciences, Head of the Department of Sociology, Political Science and History of the Fatherland, Samara Polytech. – Although the territory of the Volga region was not yet part of Russian statehood during this period, Slavic settlements were located along the riversides of the Volga, and the Volga itself was a navigable artery used by representatives of various states. There are many questions about the ownership and purpose of this ancient ship. The version that this vessel is associated with any of the Russian states (the formation of a centralized Russian state in many respects correlates with the era of the second half of the 15th - beginning of the 16th centuries, the period of the reign of Moscow Knyaz Ivan III) has a right to exist, but boat's grandiose sizes are impressive. Among the possible options, if the theory bases on the use of the Volga artery, it may be a vessel of Asian, Scandinavian or West European origin. According to the available data, it is difficult to judge whether it was used for trade or military purposes. It should be emphasized that for the accurate identification of the object and the answer to numerous questions that arise, a whole series of serious studies are required. However, it can already be said that a surviving vessel of similar size, comparable with a dating period earlier in the Middle Volga and, in particular, within the territory of the Samara Region, has not yet been found.

By the way, for the first time, the mention of a certain settlement - Samar - was found on the Volga map, compiled by the Venetian merchants Francesco and Dominico Picigano in 1367. The same settlement was marked on the map of the Italian traveler Fra Mauro in 1459.

A fragment of a metal nail was studied by different methods in the chemical laboratories of the Samara Polytech (X-ray fluorescence spectroscopy) and Samara University (atomic emission spectroscopy). The results of the two analyzes almost coincided, showing that the nail consists of 99.5% iron. According to scientists, this indicates the medieval age of the fragment, since more or less modern metals are alloying compounds.

- According to the first data, it was clear that this is an artifact consisting of iron. Corrosion penetrated the thickness of the product itself. There is another interesting detail: in the metal sample under study there are very few impurities - carbon, sulfur, phosphorus, the nail is almost pure iron with a concentration of 99.5%. This indicates a fairly perfect level of technology for the production of metal products of that time, - says Andrei Pimerzin , Doctor of Chemistry, Professor, Head of the Department of Chemical Technology of Oil and Gas Processing. – In favor of the fact that this is most likely an old sample, it also says that there are no alloying elements in it, namely additives of chromium, nickel, molybdenum. But with a small amount of copper. In its pure form, iron is practically not used today. At least today, nails are not made from pure iron.

According to scientists, this boat is of historical and cultural value, in particular, this object will help clarify in what relations were the territories of the Middle Volga, Upper and Lower Volga, how trade was carried out, etc. The Samara boat is also unique due to its age. So, the Nizhny Novgorod boat, that was found several years ago in Vetluga, a shallow tributary of the Volga, is about 300-400 years. The Vytegorsk boat from Lake Onega dating back to the 17th and 18th centuries was considered to be the «dinosaur of Russian shipbuilding».

It is obvious that the development of the theme related to the Samara boat, which is the cultural code for Samara, will give a new impetus to the development of the territory of the Samara region, will unite not only Samara, but also Russian, foreign scholars, local historians. This object has every chance of becoming a «magnet» for Russian and foreign tourists. By the way, in world practice there is experience in raising and creating museums of ancient ships (for example, the museum of the 17th-century ship «Vasa» in Stockholm). It is likely that once we can see a real ancient boat in Samara, and not just a white-stone stele on the Volga embankment.

Samara is one of the largest cities in Russia, located in the south-eastern part of the European territory of the country. The city was founded in 1586 by decree of Tsar Theodore Ioannovich as a fortress with the aim of protecting navigation on the stretch of the river flowing near the city, and to protect borders. The governor - Knyaz Grigory Zasekin was appointed as the construction manager.