The scientists have replaced polymers and cellulose by apple puree 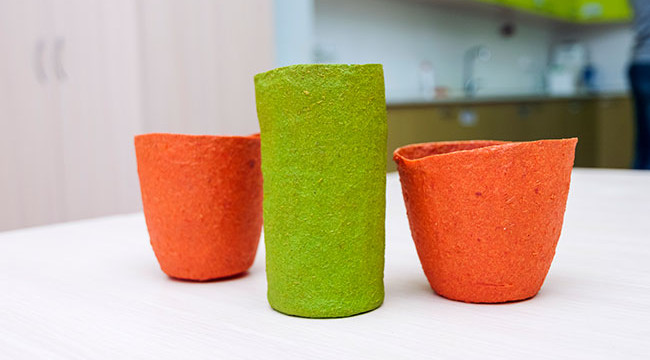 Apple dishes will help in solving the problem of environmental pollution with waste polymeric materials.

The first step of this project at the department «Technology and organization of public catering» was to make edible food films. The unique technology (received three patents) formed the basis of another ambitious project which is creating edible dishware.

The idea to create food films from natural raw materials arose during the development of a new diet for astronauts.

«Initially, we sought to create a package that would allow to store, to heat, and then to eat along with the food. Other packaging in space is inconvenient: it is difficult to dispose» says Nadezhda Makarova, project manager, Head of the department «Technology and organization of public catering », doctor of chemical sciences, professor.

Edible food film may be indispensable for those who work in the Arctic or on offshore oil platforms, or people travelling with a backpack.

In world practice there are several examples of creating such films, the samples are protected by patents, but they are conditionally edible. Such films consist not only of natural raw materials. Chemical compounds, artificial additives are used upon their production. Of course, it does not have a negative impact on the human body, but it is not fully absorbed by it.

The product obtained by Samara Polytech scientists is made exclusively from natural ingredients. No dyes or preservatives are used. By the way, the film made of vegetable raw materials has little calories, so it can be considered a dietary product.

Chemical processes that entail deep chemical changes are not carried out in the production of edible films. The developers apply the standard processes that take place in the food industry (mixing, concentrating, forming layers of raw materials). First, scientists get fruit or vegetable puree, then they form a mass with a plasticizer and dry the finished layer at a temperature not higher than 60 degrees.

Edible dishware is made according to similar technology, the only difference is that the viscous mass is poured into a special form, and then dried.

While developing food films, scientists experimented with raw materials from various fruit, berries, and vegetables, such as apples and carrots, currants, and black chokeberry, plums and strawberries, green beans, pumpkins, blueberries. However, an apple is more suitable for dishes because it has the best taste and viscoplastic properties. So, the apple glass turned out so strong that you can pour boiling water into it.

Tasty dishware, just like edible packaging, in the first place will help to solve the problem of waste disposal. After use, it can be simply thrown away or eaten, and if placed in water, it will completely dissolve in 12 hours.

In the future, scientists plan to produce whole sets of disposable dishware. They started with glasses because they are the most popular type of trash. On average, one glass costs 30-40 rubles, now scientists are working to reduce the cost of the manufacturing process. The authors of the project applied for a patent for apple technology.

By the way, France was the first in the world to abandon plastic disposable tableware. By 2020, disposable dishware should consist of at least half of natural materials, and by 2025 not less than 60 percent.

The Telegraph «Are edible plates, beakers and straws the future of packaging? We tasted them to find out»